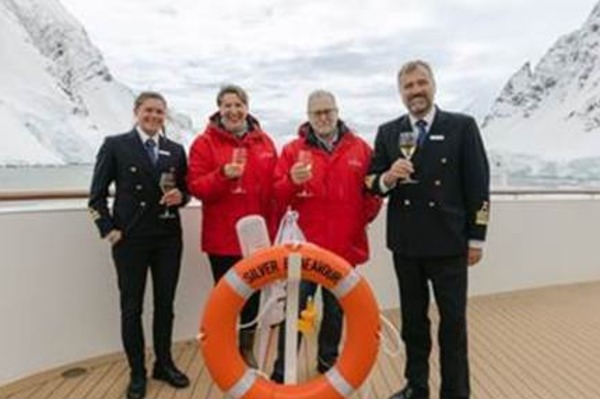 The cruise company held an expedition-style celebration in the Lemaire Channel, Antarctica, to inaugurate Silver Endeavour as the 11th ship in its fleet, and which was attended by executives from Silversea Cruises, the ship’s Godmother Felicity Aston MBE, and select members of the cruise line’s extended family, who witnessed an ice-sculpted champagne magnum smashed against Silver Endeavour’s hull to mark the cruise line’s third naming ceremony in just nine months.

Roberto Martinoli, President and CEO, Silversea Cruises, said: “We are incredibly proud to have hosted ultra-luxury cruising’s first Antarctica naming ceremony for Silver Endeavour, our third ship to be named in just nine months. I would like to thank Captain Niklas Peterstam and the ship’s crew, the entire Silversea team, Jason Liberty and all those involved at Royal Caribbean Group for their invaluable support in reaching this momentous milestone.”

Martinoli continued: “Silver Endeavour strengthens our position as the industry’s leading cruise line, broadening our diverse polar offering for our guests’ enjoyment. A source of great inspiration for our guests, we are honored to name Felicity Aston as the ship’s Godmother. Felicity is the perfect ambassador for Silversea; she shares the same unwavering sense of curiosity and adventure that unites all of our guests.”

Silversea Cruises recently unveiled 27 new voyages in 2023-2024 for the Silver Endeavour, which will call at more than 125 of the world’s most remote destinations between summer 2024 and winter 2024/2025.

Featuring a varied array of departures, itineraries, and voyage lengths, with sailings ranging from six to 21 days, the new sailings include four new voyages to the British Isles and Iceland, nine additional sailings to the Arctic, and 14 voyages to Antarctica.