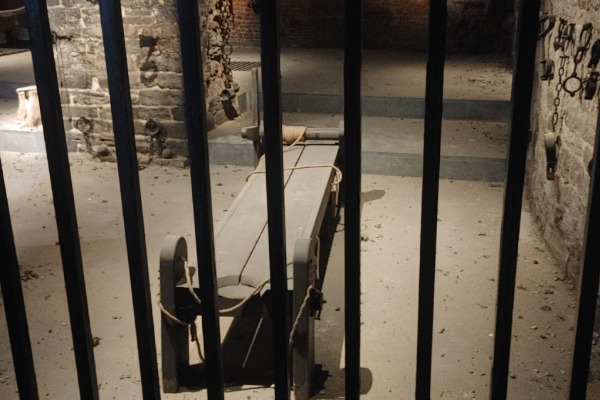 The Castle of the Counts in Ghent, Belgium, saw many people who were likely friendly. And it also saw others who were clearly fiendish.

The imposing riverside structure dates back to the 12th century and long served as a retreat for aristocrats, who were clearly at times unforgiving, as those who explore what is now a major tourist attraction that has thick stone walls, winding stairs and ramparts will learn.

Devices that provide narration in several languages tell of castle’s Oubliette, a dungeon-like facility where castle residents and visitors could peer down through a hole in the stone floor onto the wretched sorts imprisoned below.

And in another part of the castle tourists can look through bars into a room home to grim-looking torture devices that could be used to punish people in a horrific manner for different offenses, including counterfeiting.

(The narration at one point mentions 5 particularly gruesome executions that took place in the structure, with screaming heard in the narration background.)

Another castle room features fearsome looking weaponry dating back to the Middle Ages.
Castle builder Philip of Alsace was credited with positives, including modernizing the local legal system.

And his conscience may have been clear about some of the disturbing activities that took place in his castle given his participation in the Crusades, with the then Pope stating that those who answered the call to head to Jerusalem would be absolved of any sins.

And on that note, Happy Halloween all!