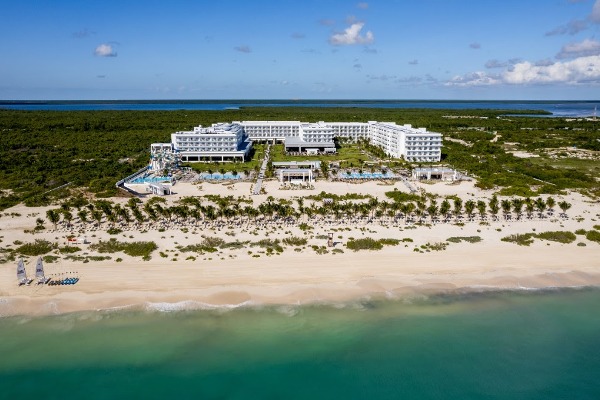 RIU Hotels & Resorts has inaugurated its third hotel in Costa Mujeres, the Riu Latino. The chain, which is celebrating its 25th Anniversary in Mexico this year, now has 21 hotels at the six most popular beach destinations in the country, as well as in Guadalajara, Jalisco. The Riu Latino, a five-star establishment with 24-hour all-inclusive services, offers all guests the amenities and facilities of Riu Classic Hotels, but with the added value of the exclusive service for which the adults-only resorts are known. Until now, it was reserved only for Riu Palace hotels.

Among its 594 rooms, guests will be able to choose from standard double rooms to suites with views to the Caribbean Sea, as well as luxury swim-out rooms with private pools. The rooms will have natural, light colours, inviting guests to disconnect and enjoy the tranquillity the destination has to offer.

The hotel has six restaurants: the main restaurant Moctezuma; an Italian restaurant Milan, an Asian restaurant called Geisha; a steak house; a gourmet restaurant, Kulinarium; and Pepe’s Food, a grill buffet. It also has five bars: the lounge bar Mariachi, with a terrace; the lobby bar Velvet; a 24-hour sports bar; and our pool bars Tequila and Mezcal, the latter being a swim-up bar.

The outdoor space has five pools, in addition to Splash Water World Water Park. Guests can also unwind at the wellness centre Renova Spa, which has a beauty and hair salon and massage service.

Guests are also guaranteed to be entertained. Located on the beachfront of Bahía Mujeres, they can go out on a catamaran, try kayaking and take a beginners’ scuba course in the pool. To round out the fun, club Pacha is open from 11 pm to 2 am, and guests can also revel in the various parties taking place at the hotel: Foam Fest, Silent Disco and Beach Party.

Starting in December, Riu Latino guests will also be able to enjoy the famous Riu Party events at Riu Dunamar. The Riu Get Together Party will be held in the hotel theatre every Friday, alternating between the White Party and Neon Party themes, so all guests in this destination can enjoy one of the chain’s star products.

With the opening of this new hotel, RIU is complementing its hotels in Costa Mujeres, joining Riu Palace Costa Mujeres and Riu Dunamar, both 3 kilometres from the new hotel. The Riu Latino is 16 kilometres from Cancun, where archeology and history lovers can discover Maya culture. The international airport is 33 kilometres away with great connections to get to the hotel. The Riu Latino will not be the chain’s last new hotel in Mexico this year, as the new Riu Palace Kukulkan is expected to open in November.