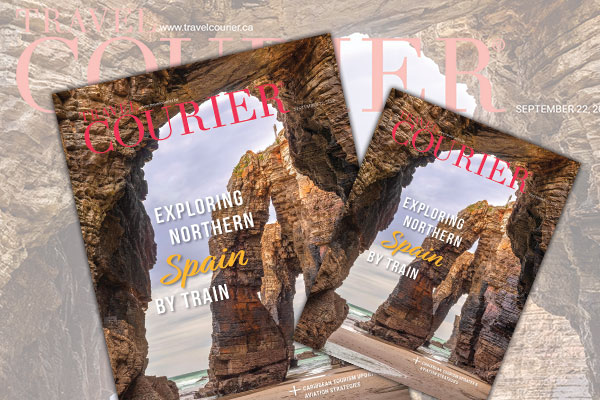 A ritual quickly developed in the dining cart onboard the Costa Verde Express, which is decked out with wooden accents and olive green velvet chairs reminiscent of the golden days of train travel era aboard the Orient Express.

After a three-course meal, the luxury train’s trip director appeared nightly to hand out the next day’s itinerary over post-supper drinks like port or schnapps. This overview gets the group of passengers from as far as Brazil, the US, across Europe and myself as the sole Canadian, excited to take in some of the top sights in the region, which is known as Green Spain for its scenery, coastal landscapes and lush vegetation.

From Cangas de Onís’ famous roman bridge with five arches and a Victoria Cross in the middle, to the remarkable Covadonga Sanctuary, which is built into the side of a mountain, the journey promises insights into a side of Spain that’s vastly different from perennial favourites like Barcelona and Madrid.

The coastal route features many notable highlights like Picos de Europa, a stunning mountain range peeking out through the mist with cows roaming freely. The scenery encompasses such sights like vivid blue lakes in a scene reminiscent of Switzerland, or the rock formations of Playa de las Catedrales, where during low tide, you can walk through the arches that line the beach.

There’s also free time built into the schedule at various stops along the route to allow for independent exploration, or like multiple women on the trip opted for, shopping.

As the late Anthony Bourdain once said, “Letting the happy accident happen is what a lot of vacation itineraries miss, I think, and I’m always trying to push people to allow those things to happen rather than stick to some rigid itinerary.”

For the full story, don’t miss the latest issue of TRAVEL COURIER.