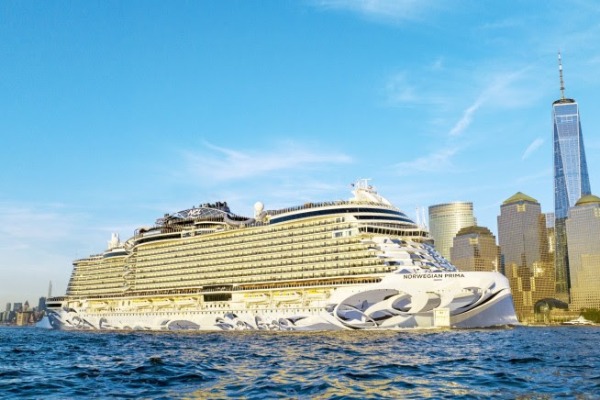 As NCL’s newest vessel in the Brand’s 18-ship fleet, Norwegian Prima, made its grand U.S. debut in New York City on Oct. 6, 2022 following a historic launch as the first major cruise ship to be christened in Reykjavik, Iceland.

For the first time in the U.S., Norwegian Prima welcomed more than 2,400 guests who enjoyed unparalleled elevated experiences only available on NCL’s Prima Class, including the world’s only and largest three-level racetrack at sea with the Prima Speedway, the Brand’s first upscale Food Hall, Indulge, and The Metropolitan, the cruise industry’s first sustainable cocktail bar featuring responsibly crafted zero-waste cocktails prepared with surplus ingredients.

Norwegian Prima is the first of six ships in the Brand’s groundbreaking Prima Class. At 965 feet (294 meters long) and more than 143,535 tons with capacity for 3,100 guests at double occupancy, Norwegian Prima offers the highest staffing levels and space ratio of any contemporary or premium cruise ship.

It also boasts the largest variety of suite categories available at sea as well as a redefined The Haven by Norwegian, NCL’s ultra-premium keycard only access ship-within-a-ship concept. Her variety of recreational activities including the fastest slides at sea – The Rush and The Drop – and the Prima Speedway, provide guests with adrenaline-pumping moments. Spaces like Ocean Boulevard, the 44,000-square foot outdoor walkway which wraps around the entire ship; The Concourse, which boasts a multi-million-dollar outdoor sculpture garden; and expansive pool decks and infinity style pools at Infinity Beach, offer guests a chance to sit back and relax.

Sail on over to www.ncl.com for more.