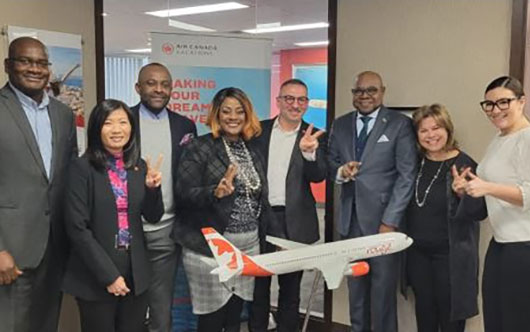 Said Minister Bartlett: “So far, we have been successful in commitments that will see the number of airline seats at a record 283,000 out of Canada to Jamaica this winter; 26,000 more seats than was recorded in 2019, pre-COVID-19,” he announced this afternoon. These are from major travel partners such as Air Canada Vacations, WestJet, Transat and Sunwing.

Speaking in Canada, Minister Bartlett noted that: “The marketing program for Canada is now in full gear” and supported by Director of Tourism, Donovan White and the Jamaica Tourist Board’s Regional Director for Canada, Angella Bennett, “we are having meetings with our airline partners and tour operators.”

In Canada with a number of Jamaica’s senior tourism officials, the Minister participated in a series of activities between various segments of the market that take in Toronto, Calgary, Winnipeg, Montreal and Ottawa and, he observed: “We are satisfied that the market has bounced back post-COVID.”

The visit is also being used to launch the JTB’s new “Come Back” campaign and Minister Bartlett contends that “with added inventory coming in Jamaica and a new thrust in terms of the quality product and recognition of the value proposition that Jamaica offers, we are optimistic that in 2023/24 we will see a full recovery of the Canadian market to the levels that we were in the best of times in 2010.”