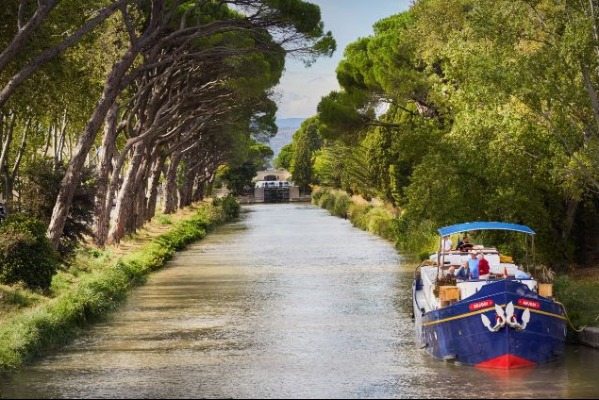 European Waterways reports that although historic drought conditions are drying up major European rivers and impacting water traffic, manmade canals can be less impacted. There is no natural flow of water subject to nature and large reservoirs keep them “topped up.”  As a result, the company has been able to operate its many luxury hotel barges in Europe and the UK with less disruption than cruise operators on larger rivers that include the Rhine and the Danube.

Derek Banks, European Waterways’ managing director, said: “In addition to the nature of canals, the smaller sizes of our vessels give us more flexibility to relocate them to nearby waterways that are less affected, if necessary. We can therefore maintain many of the same excursions to ensure the cruise experience remains at the highest standards for our guests.”

Banks says that cruising between Venice and the Renaissance city of Mantua on European Waterways’ La Bella Vita hotel barge “has not been affected.”

The vessel is bypassing stretches of the Po River impacted by the drought and utilizing the Canal Bianco, which continues to support normal traffic. La Bella Vita is European Waterways’ largest and most unique hotel barge with a capacity of up to 20 passengers.

In France, where water levels have dropped on some higher stretches near canal summits, Banks says the company avoids potential disruptions to its cruises by moving some vessels to better supplied sectors lower down the waterway. These include La Belle Epoque in Northern Burgundy and Renaissance in the Upper Loire and Western Burgundy, which were moved to different routes earlier. Following recent rains, the company will move Renaissance back to its normal route as the situation eases.

Other regions in France remain unaffected. Most notably are cruises on the Canal du Midi, which is recognized as the best in France for water management. The company operates three hotel barges in different sections of the canal: the eight-passenger Enchanté between Salèlles d’Aude and Trèbes ; the eight-passenger Anjodi between Marseillan and Le Somail ; and the 10-passenger Athos between Argeliers and Marseillan.

In the UK, the company’s Magna Carta hotel barge is currently operating in the middle section of the River Thames, where water levels are normal, and it’s “business as usual” in Scotland, where the company’s Scottish Highlander and Spirit of Scotland cruise the famed Caledonian Canal.

Said Banks: “Lock Ness holds more water than all of England’s rivers, lakes and reservoirs. The canal is also fed by Lochs Dochfour, Oich and Lochy, all which contain massive water reserves.”

He added: “You can’t hold back a river to maintain its water levels, but that’s exactly what you do with a canal.”