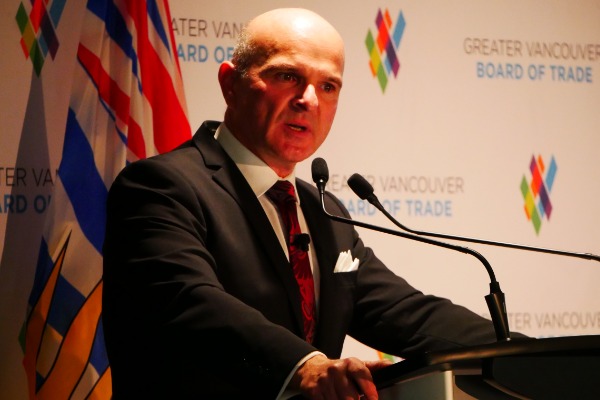 There were words of advice, and also hints of an upcoming strategy for the tourism sector, in a presentation by the federal minister of tourism in Vancouver last week.

Hon. Randy Boissonnault laid out challenges for tourism industry leaders in his address, dubbed “A Vision for the Canadian Tourism Economy.”

The breakfast meeting was hosted by the Greater Vancouver Board of Trade, at the Pan Pacific Hotel Vancouver.

He told the early morning gathering that there was no time to lose in promoting the tourism assets of Canada to foreign visitors – especially those from America.

“Now is the time to share what we have in Canada with the rest of the world,” said the minister. “We know how important tourism is to the economy of the country,” he said, noting that tourism commerce is a key driver of the B.C. economy, generating $22.3 billion in revenue in 2019.

But he said that Canadian tourism stakeholders need to up their game in order to compete more effectively with tourism industries in other nations. For instance, tourism accounts for 8% of GDP in France, and 14% in Spain, as compared to just 2% of GDP for Canada.

Canada has many tourism assets, so why doesn’t tourism account for a higher percentage of the country’s GDP, he asked rhetorically.

Boissonnault also highlighted Indonesia as having a progressive development outlook, saying that “they are building 10 new Balis,” as well as building a new capital city in a flood-free location.

“We’re not working on that scale,” he said, wondering why there are not more Fogo Islands or Metis Crossings – top resorts with international ratings and clientele.

He also referenced world troubles like war and economic strife, saying that “as we head into strong headwinds,” he wants international travellers to choose Canada as a safe place to visit.

Boissonault also hinted at what might be in store with the renewal of the Federal Tourism Growth Strategy, but skated around requests for details, saying that these were still in the works.

He did say, however, that the pandemic had delivered some hard lessons, pointing to a lack of preparation for the demand surge for passports as Covid-19 receded. “We didn’t have a playbook for the pandemic,” said Boissonault, suggesting that better passport mechanisms would be part of the upcoming tourism strategy.

Federal tourism minister Randy Boissonnault at the podium during a presentation to members of the Greater Vancouver Board of Trade last week.